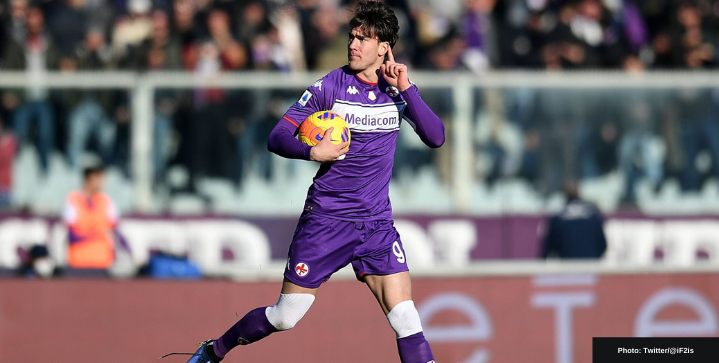 Arsenal have made a fresh player plus cash bid for Fiorentina star striker Dušan Vlahovic.

The Gunners have offered €55m plus Lucas Torreira to Fiorentina for the player, with a total package amounting to €70m.

The Serbian international is one of the most wanted properties in the transfer market given his hot scoring streak for the Serie A side. Only Robert Lewandowski scored more league goals in 2021 than Vlahovic.

His 33 Serie A strikes tied Ronaldo for the most goals in Seria A year. The 21-year-old totaled 41 goals and provided 7 assists for both club and country last year.

With power, technique, and grace, Vlahovic is quickly building the reputation of a mini Erling Haaland.

While Vlahovic does not plan to renew his contract with Fiorentina, it appears that his future may lie elsewhere other than Arsenal. Back in November, the player’s agent refused to take calls from the north London side.

According to transfer guru Fabrizio Romano, the player continues to balk at Arsenal’s bid attempts because he’s more interested in playing for one of the big clubs in Spain or Italy with Barcelona and Juventus preferred destinations. Premier League sides Manchester City and Spurs remain intrigued by the player as well.

All in all, it looks more likely Vlahović will leave in the summer rather than this January. Arsenal are said to be looking at Swedish striker Alexander Isak as an alternative to Vlahovic. The Gunners will need to offload striker Pierre-Emerick Aubameyang before doing any serious business.

Arsenal fans, who do you prefer to lead the attack: Dušan Vlahovic or Alexander Isak?