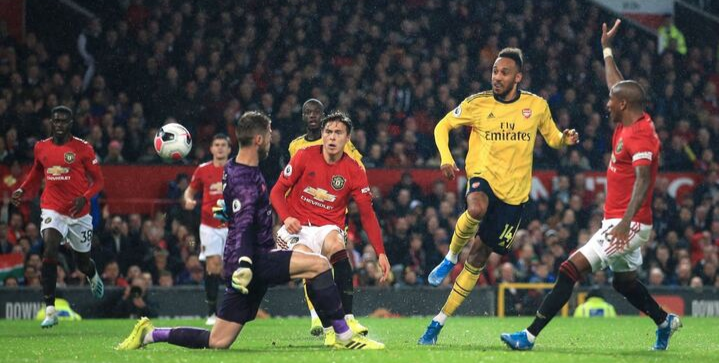 Ashley Young and Granit Xhaka served as captains in tonight’s game between Manchester United and Arsenal, a far cry from the days when Roy Keane battled it out against Patrick Vieira in the fight for the league’s top spot.

What used to be one of the fiercest Premier League clashes has turned into just another regular-season matchup.

A scrappy mess of a match

It took 28 minutes for either team to put a shot on goal. It took the last five minutes of the first half to pick things up from a cagey start.

Scott McTominay scored a thumper of a goal in the 45th minute to put the home side up. Arsenal’s newly named captain Granit Xhaka appeared to duck at the strike, letting the ball whizz over his head instead of fighting for the deflection.

Aubameyang equalized in the 58th minute when 18-year-old Bukayo Saka, the youngest’s ever player to start in a Manchester United-Arsenal fixture, played Auba a perfect lead-pass. The goal was flagged offside before VAR reversed the decision, showing that Maguire played the striker onside.

Aubameyang has now scored 14 goals in his last 14 Premier League starts and 17 goals in the last 17 competitions, two more than Manchester United.

“We came back in the second half with great spirit. We did the same last week; maybe we need to start with more strength and confidence. We have great power and we can do great things,” said Aubameyang after the match.

Arsenal have not won a Premier League match at Old Trafford since 2006. Even more, they have failed to beat a Big Six side away since defeating Man City 2-0 back in January 2015.

Meanwhile, Manchester United have suffered their worst start in seven league games since 1989-1990.

Tonight’s stalemate means Arsenal and United fall to four, and ten in the table, respectively, and together share just as many points as league leaders Liverpool (21).