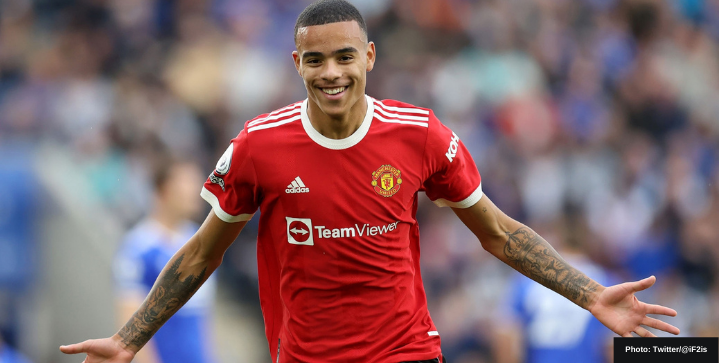 According to El Nacional, both Barcelona and Arsenal are monitoring the availability of Manchester United starlet Mason Greenwood.

The 20-year-old is growing frustrated with his lack of playing time at Old Trafford under new boss Ralf Rangnick. Having Ronaldo in the dressing room, not to mention always the first name on the team sheet, could also stunt more than improve the youngster’s game. Some even suggest that there’s a permanent rift growing between the two players.

Greenwood, who scored in United’s Champions League tie last week against Young Boys, knows that he has plenty of suitors elsewhere.

Barcelona’s Joan Laporta is a keen admirer of the striker, envisioning the Englishman pairing up with wonderkid Ansu Fati. But the emerging roster of first-team fledglings going on at the Emirates, evinced with Hale End stars Bukayo Saka and Emile Smith-Rowe could attract Greenwood to North London.

According to transfer guru Fabrizio Romano, Arsenal are actively pursuing Greenwood as an option at striker for this winter or next summer. The Gunners want to negotiate the €60M transfer fee for a player whose contract expires in 2025.

Arsenal can certainly offer Greenwood first-team football. 32-year-old Pierre-Emerick Aubameyang appears to be on his way out of the Emirates after being stripped of his captaincy and excluded from Mikel Arteta’s selection plans.

But would United sell the fourth-highest scoring teenager in Premier League history to a top-six rival? After all, the Red Devils academy player rejected a big-money deal from Juventus two years ago to stay at United.

Yet no one thought that Van Persie to Manchester United was a real deal either. Greenwood is a deadly finisher of the same RVP mold, not just another Danny Welbeck.

Man United fans, would you be willing to let Mason Greenwood go to Arsenal or Barcelona at the right price?