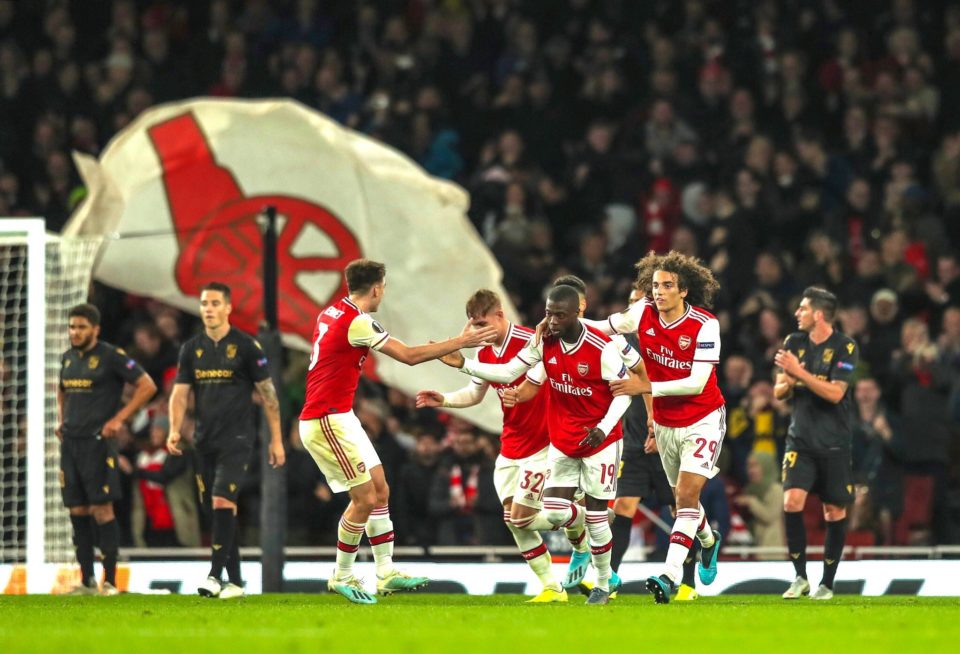 Vitória Guimarães nearly upset Arsenal at the Emirates in Matchday 3 of the Europa League.

The Gunners now lead Group F with all 9 points. But tonight’s performance merely masks many of the existing issues in North London.

Here are 5 things we took away from Emery’s side in Matchday 3.

He was one of the few positives to take of Arsenal’s one-nil loss to Sheffield United on Monday. He’s been producing chances but hasn’t nailed down the finishing touch. He even missed a sitter at Bramall Lane.

But tonight he put in a memorable spell for the Gunners, coming in the 75th minute as a substitute to score two glorious free kicks — the first to level the score at 2-2 in the 80th minute, the second another free-kick to win it in stoppage time.

Pepe’s brace could finally be the spark that propels him to the level fans expect of him for such a hefty price tag. Of course, he’s still waiting to snag his first open goal from play.

Still, no one will forget that he saved Emery’s job tonight.

Don’t let the three points fool you. Arsenal’s performance was abysmal, yet again.

Before the match, Emery proclaimed that he’s improved Arsenal and made the team more competitive despite having a poorer record than Wenger.

Emery is in the hot seat and he knows it. And depending on individual quality to save him can only last so long.

So what’s the issue? For one, it could come down to simple communication.

“I don’t think that Emery really connects with his players. It’s not honest to judge the coach based on tonight – it’s based on the last couple of months and even the year before,” former Arsenal star Robin van Persie said of Emery.

3. Ozil left out of matchday squad for 5th game running

Ozil has been left out of Emery’s squad in Arsenal’s last five games. And the German’s absence is starting to show.

Arsenal look lackluster and uncreative, even against a mediocre side like Vitória Guimarães.

When asked about Ozil after the match, Emery replied “I think tonight is not the time to speak about that. He wasn’t in the squad and that was the decision.”

Fair enough, but what next? Ozil shared this cryptic post on social media the day before the match. Make of it what you will.

Alexandre Lacazette disappointed in his first start since injury, lacking that extra spark and mental sharpness.

He also tried to get one of Vitória Guimarães defenders red-carded by flopping to the slightest of head-butts.

While Pepe’s substitution for Lacazette clearly changed the game, the Frenchman will clearly have more to offer when he’s back at 100% fitness.

The 18-year-old Brazilian has scored five goals in six games for the Gunners. He and new signing Kieran Tierney have also combined well with back-to-back goals in the last two Europa matches together. Both of those goals have been headers — not bad for Martinelli’s 5’9 frame.

Arsenal fans will hope Emery considers Martinelli for the start for Crystal Palace on Sunday. But caution: he still needs time to blossom.