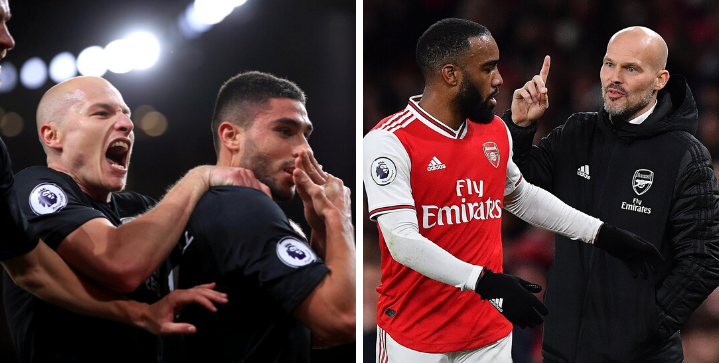 Arsenal’s winless streak continued on Thursday night as the Gunners lost 2-1 to Brighton.

Arsenal have now gone 9 games without a win, extending their longest winless streak since 1977. They remain in 10th place in the Premier League table.

Here are 5 things we took away from another Arsenal dud at the Emirates.

Arsenal have now conceded the opening goal in each of their last four Premier League games.

The Emirates erupted with boos at halftime.

While Arsenal faired a much-better start to the second half — Lacazette equalized in the 51st minute — Brighton came roaring back to go ahead in the 80th minute.

The Emirates filled up with more boos at the final whistle.

2. Ljungberg fails to free Arsenal from its ongoing misery

The away side controlled 52% of the ball before halftime with 5 shots on targets versus Arsenal’s two. Pierre-Emerick Aubameyang and Alexandre Lacazette exchanged a mere pass in the first 45 minutes against Brighton.

Lacking intensity and too slow to build up — the problems seem to run deeper than the recently ousted Unai Emery. Is Freddie even the right interim manager to fix the Gunners?

3. Top performance from the Seagulls

Give credit where credit is due.

The Seagulls snag their first-ever win away at the Emirates. Brighton boss Graham Potter remains unbeaten at the North London stadium, having won there in the Europa League as boss of Norwegian side Östersund in 2018.

A nifty header from Neal Maupay on Mooy’s cross gave Brighton the go-ahead goal in the 79th minute.

The Gunners have failed to win their last nine matches across all competitions, their longest winless run since March 1977.

The last time Arsenal won a game was in October, more than 2 months ago.

“I don’t know what to say. I have the feeling that whatever we do it doesn’t come out right,” said Hector Bellerin after the match.

“The team gave its best, we created chances, we defended good but it seems like we need so many chances to score and teams score every chance against us. I am lost for words a little bit.

“Every single player has given 100 percent. When we go out on to the pitch we want to win and give our best. I feel that our team was full of energy, it’s hard to take. We have to keep going, I am sure 100% that results will come.

“Football is like life sometimes, you go through ups and downs. I have won trophies here, had good seasons and bad seasons.”

5. Arsenal sit in 10th place with no signs of progress

The Gunners couldn’t even get the benefit of a new manager bounce. On top of that, hiring a permanent coach still seems a ways away.

Max Allegri has ruled himself out of contention for the Premier League until his sabbatical ends next year.

The mid-table Gunners need more than a bandaid at this juncture.

Could a former arch-rival boss fill the void? It looks like Pochettino still prefers Manchester United. And after the Ljungberg experiment, hiring another Invincible in Patrick Vieira feels more nostalgic than practical.

Arsenal will try to turn things around when they take on West Ham on Monday night.