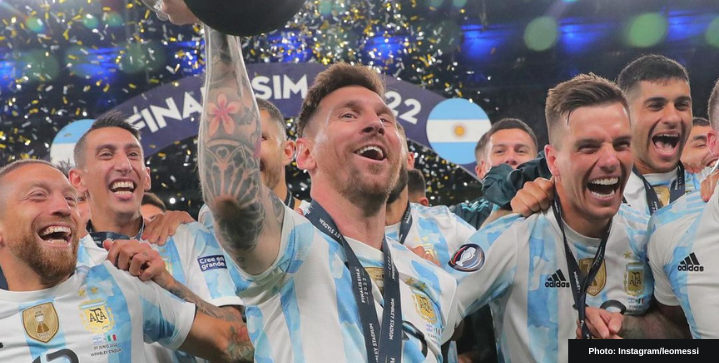 There’s a reason Argentina is one of the most feared team’s going into World Cup Qatar. The current Albiceleste roster features not only the legendary Lionel Messi but also the likes of prolific attackers Angel Di Maria and Lautaro Martinez, all on the top 10 scoring chart.

Jose Sanfilippo was one of the most feared center-forwards in the game during his prime. The Boca and San Lorenzo striker featured for Argentina during the 1959 Copa America, where he finished as the tournament’s top scorer.

Center back Daniel Passarella captained the Argentina side that won the 1978 World Cup. The two-time World Cup winner could also score goals, as he makes the top scoring Albiceleste chart at the ninth spot.

Currently one of the world’s best attackers, it’s no surprise Lautaro Martinez already appears on Argentina’s top scoring list. The striker has scored 21 goals in just 39 appearances for the national side. He’ll continue to wreak havoc on defenses in Qatar.

He scored the memorable game-winner in the final of Argentina’s Copa America triumph in 2021. Winger Angel Di Maria currently has 25 strikes with the Albiceleste and is the fourth most capped player in the nation’s history.

The man, the myth, the legend. Argentina legend Diego Maradona scored two of the most memorable goals in World Cup history — the “Hand of God” and “Goal of the Century” against England. He scored 10 of his team’s 14 goals in during that triumphant World Cup.

Gonzalo Higuain played a vital role as part of the fantastic 4 — Messi, Di Maria, and Aguero — for Argentina during the 2014 World Cup run. He scored the all-important goal against Belgium, which took Argentina to the semi-finals.

The striker has enjoyed a prolific goal-scoring career across Europe (Real Madrid, Napoli, Juventus) and, by little surprise, comes in at fifth on the all-time scoring list.

Hernan Crespo was one of Argentina’s most lethal strikers and one of the best of his generation with prolific spells at Parma and Lazio.

He scored 35 goals in just 64 appearances for the national team, ranking him 4th behind Aguero, Batistuta, and Messi.

Sergio Aguero, a striker with an insane goal appetite, finished his illustrious Argentina career with 41 goals in 101 matches. His last game — a heart condition forced him to retire early — was a 1-nil win against Brazil to win Copa America. He’s also the fifth all-time Premier League scorer and highest-ever non-English scorer in the EPL with 184 strikes, including that historic last-second league-winning hit for Man City.

Gabriel Batistuta was the original goal machine before Haaland, Lewandowski, Ronaldo, and Messi. He oozed class and scored countless goals in the 90s — 356 in 633 games, to be exact.

The striker scored two hat tricks in two different World Cups and finished as the top scorer with six goals in his first and triumphant Copa America for Argentina in 1991. He’s Argentina leading World Cup scorer with ten strikes.

Quite possibly the greatest Argentine footballer of all-time (we’ll let you debate that), Lionel Messi is undoubtedly the country’s top scorer, with nearly a century of goals to his name. He scored as many World Cup goals as Diego Maradona (8) in the same amount of games (21) and surpassed Gabriel Batistuta as Team Argentina’s all-time top goal scorer at the World Cup (11).

With his assist against Mexico in the 2022 World Cup group stages, he becomes the first man ever to assist in 5 different World Cups. During the 2022 final group stage match against Poland, Messi overtook Maradona as the most-capped Argentinian in World Cup history with 22 appearances.

Can the GOAT and Argentina’s most-capped player finish his international career as a World Cup winner in Qatar? Oh man, the stories they’d write about the last dance. And guess what? Messi delivered.