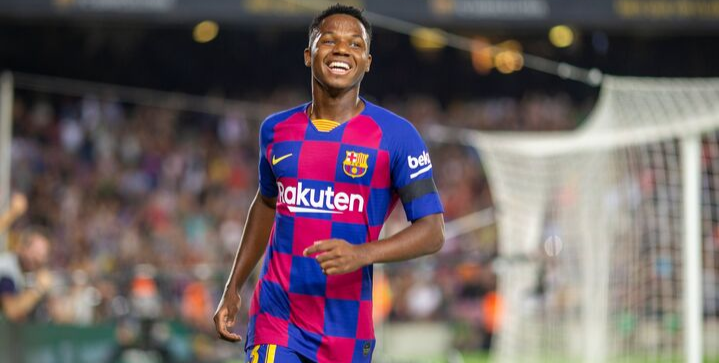 Spain is trying to nationalize teenage sensation Ansu Fati so he can join their national team.

“The people of the Spanish FA are working on it to bring Ansu Fati and then it will be the decision of the player,” said Spain coach Robert Moreno.

The 16-year-old earned his first senior start in Saturday’s win over Valencia where he bagged the team’s first goal 111 seconds into the match and added an assist to Frenkie De Jong five minutes later.

“It is not easy for anyone to play for Barca, even less so for someone as young as Ansu Fati… It is not normal for him to score on the first ball, assist on the second,” said his boss Ernesto Valverde who is still hesitant to crown him the next Messi.

Ansumane “Ansu” Fati grew up playing football in the streets of Bissau, the capital of Guinea-Bissau before he was spotted at age eight and promptly moved to Sevilla’s academy. After rejecting an offer to join Real Madrid’s youth team at 9-years-old, he joined La Masia in Barcelona a year later.

Fati’s stock has skyrocketed since, having got the call up to Barcelona’s senior practice squad last month with the likes of Dembele, Messi, and Suarez all out injured.

Fati is breaking records all over the place, with yet another opportunity to become the youngest scorer of all-time in Champions League with a goal tomorrow against Dortmund.

A star is being born.