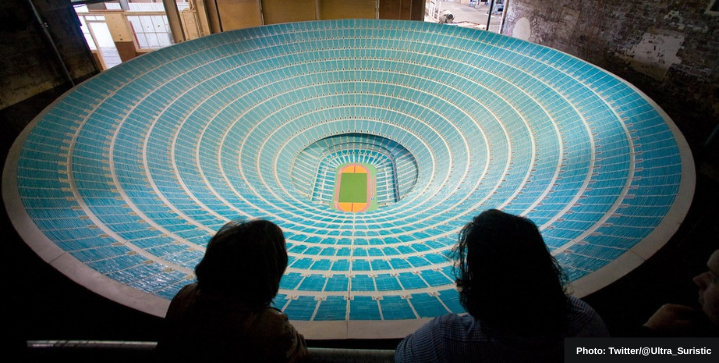 American artist Paul Pfeiffer has constructed the world’s first one million-seater stadium, at least a concept of such.

The work of art called “Vitruvian Figure” is a 10-foot model of a stadium that’s nearly impossible to imagine in the real world. It takes inspiration from Sydney’s 110,000-capacity Olympic Stadium, which hosted the opening of the 2000 Olympics. The piece is displayed at the Inhotim Centre for Contemporary Art in Brumadinho.

Currently, the world’s largest football venue is Rungrado First Of May Stadium in Pyongyang, North Korea, which holds 114,000 – 150,000 people.

Imagine watching Cristiano Ronaldo or Lionel Messi from the stands in Pfeiffer’s futuristic installation — binoculars, anybody?

Logistically speaking, a stadium of such magnitude would be a nightmare. The parking lot itself would have to stretch miles — not to mention lines at the bathroom and concession stands.

At best, it’s a stadium for ants. A fascinating experiment, nonetheless.