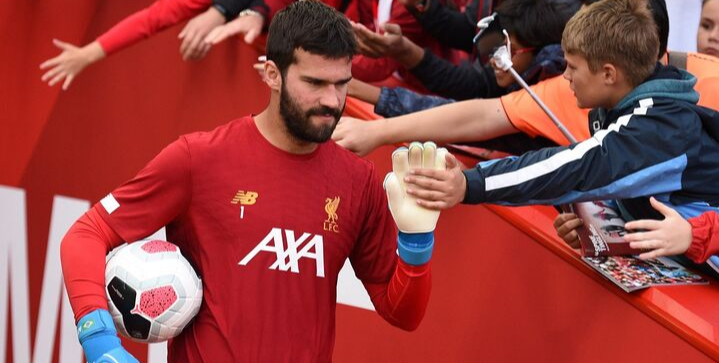 Liverpool’s number one goalkeeper Alisson Becker is set to return to full training on Sunday. The Brazilian tore his calf in the opening weekend win over Norwich.

“Alisson looks like he is close, but the final word is with the medical department,” said Liverpool boss Jurgen Klopp. “He’s not in contention for tomorrow. Maybe he can train with the team from Sunday on. Really close.”

The great wall is back

Over the last seven weeks, backup goalie Adrian who many fans doubted, has sufficiently fulfilled his temporary role. He even made the crucial save as Liverpool triumphed over Chelsea in the 2019 Super Cup.

“‘Adrian’s form has made everything easy for us,” said Klopp. “Imagine if we asked Ali after a week ‘ok you limp but we don’t care, go in goal!’ Adrian is doing a brilliant job and that makes everything easier, 100 percent.

“It’s important with injuries that you don’t rush it, but if you have no other option in a position then sometimes you cut two or three days off the rehab time. We don’t like to take risks. We will see when he’s ready. Until then, Adrian is our goalie and so far he did really well.”

There’s no doubt Alisson’s return gives Liverpool a boost between the sticks. The Brazilian number one led the national team to the 2019 Copa America title, snatching the tournament’s Golden Glove along the way.

Earlier this week, Alisson was the awarded the Best FIFA Men’s Goalkeeper for 2019 for his excellent form in last year’s Champions League.

“..I just think how I want to play, I want to be there, I want to help my team-mates. I’m looking forward [to being back], I can’t wait anymore,” said Alisson on his impending return.

Alisson’s presence is invaluable if Liverpool are to make a Premier League title run and try for consecutive Champions League trophies.