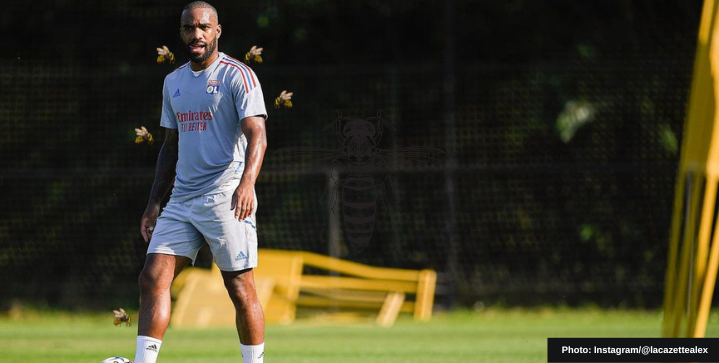 Olympique Lyon striker Alexandre Lacazette will sit out the club’s friendly against Feyenoord this weekend due to a massive wasp attack, according to L’Equipe.

That’s right — the former Arsenal man won’t be buzzing about this one. He reportedly suffered nearly a dozen wasp stings in the Dutch forest. Lyon are preparing for the upcoming Ligue 1 season in the Netherlands.

The wasps also stung Lacazette’s teammate, Moussa Dembele, but the forward was able to return to pre-season training later that day and is expected to be available for Sunday’s match.

Sidelined by the stings

The 31-year-old Frenchman sealed an emotional return to his boyhood club Lyon on a free transfer from Arsenal earlier this month.

“Thank you for the welcome and the love shown in recent months,” Laca told Lyon fans. “My return has become obvious in recent weeks. Even without Europe, the project is important.

“I felt useful in the locker room and on the pitch. It was the best decision to make. I took some time to make my decision. Football is a beautiful profession.”

Lacazette scored 71 goals in 206 appearances for the Gunners but only netted four last season. However, he’ll be looking to add to his stats at Lyon, where he still ranks as the club’s fourth all-time scorer with 129 strikes in 275 games.

Lyon kick-off the Ligue 1 season against newly-promoted team Ajaccio on August 5. Get back to full strength soon, Alex.