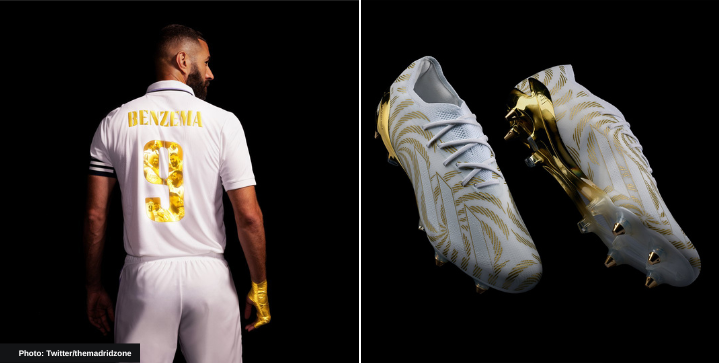 The golden collection includes the striker’s iconic bandage covered in gold which the brand teased yesterday and followed up on a new film, Hand of Gold, on Tuesday.

A serious injury in 2019 forced Benzema to don the bandage, a piece he’s worn in every game since. The boxer-like wrap represents the forward’s never-say-die-attitude from the gritty young kid at Lyon to the 34-year-old enduring Champions League hero at the top.

“In 2019, several injuries to the hand forced the footballer to start wearing a bandage during games, but this did not prevent him from continuing to shine until reaching the top. The bandage has become one of his trademarks and a symbol of his ability to overcome difficulties, proving once again that nothing is impossible (Impossible Is Nothing),” said Adidas.

The man with the golden touch

Adidas also released a limited edition Benzema Real Madrid home kit with the player’s name and number printed in gold. You can buy the shirt at the official Real Madrid online store.