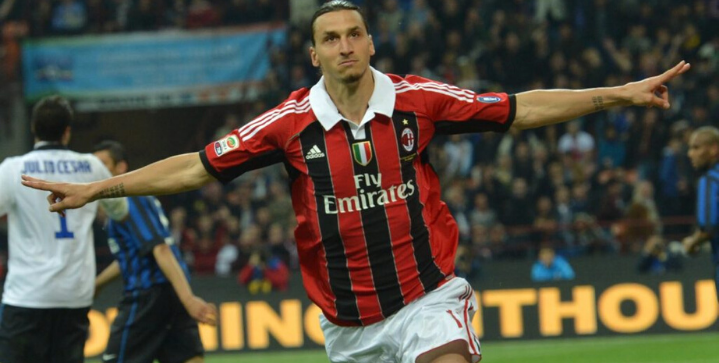 From Marco van Basten to Andriy Shevchenko, AC Milan has featured some of the best forwards of all-time. In this list, we’ll rank the top eleven Rossoneri strikers to date.

The second-highest goalscorer in AC Milan’s history, the Ukrainian Andriy Shevchenko netted 175 goals over 8 seasons (296 games) and won the Ballon d’Or in 2004. While trophyless his first four years, he nonetheless won the Champions League in 2004 along with an Italian Super Cup. He had already won the Italian Cup and Serie A in 2003.

Considered one of the greatest footballers of all time, Marco van Basten played six years for the Rossoneri bowing out with 201 domestic league appearances and 124 goals to his name. During his time at the San Siro, he won the 1992 Ballon d’Or, a pair of European Cups, three Italian Cups, and was a two-time UEFA Supercup winner.

Kaka played 6 years at the San Siro as an attacking midfielder, earning over 200 domestic league caps and notching nearly 100 goals. The 2007 Ballon d’Or winner was virtually unstoppable in his prime, where also won Champions League in 2007, along with an Italian Championship, Italian Super Cup, a UEFA Supercup.

A former Ballon d’Or winner at Paris Saint-Germain, the center-forward George Weah powered the AC Milan side to two league titles in his five years at the San Siro where he earned 114 domestic league appearances and scored nearly 50 goals.

The enigmatic Swedish striker Zlatan Ibrahimović played two seasons with AC Milan in his first spell with the club from 2010 – 2012, where he scored 56 goals in 85 games. His honors included a 2010/11 Serie A title and a 2011 Supercoppa Italiana.

Ibra made a remarkable return to the Serie A giants seven years later in December 2019. The forward, aging like a fine wine, helped the Rossoneri achieve their first Scudetto in 11 years during the 2021-22 season. It was Ibra’s 5th Serie A title — he won three others with Inter Milan.

Ibrahimović signed another new contract with AC Milan this summer, keeping him at the San Siro until 2023.

With 221 goals in 257 games for the Rossoneri, Italian striker Gunnar Nordahl assuredly deserves his spot on the list. He also still holds the record for most goals in a season with 35. His honors include two Serie A titles and two Latin Cups.

The Brazilian frontman netted 161 times in 246 appearances for the club. He won two Serie A and the 1963 European Cup, of which he was the tournament’s leading goalscorer with fourteen goals.

The Brazilian forward featured in 95 games for the Rossoneri, scoring 26 goals and winning the Serie A in the 2010 season. If it was only for a stricter diet and right attitude, Ronaldinho could’ve continued the magic he demonstrated at Barcelona and on the Brazilian national team.

The Brazilian striker helped AC Milan win the league in his first year with the club, followed by the Supercoppa Italiana at the beginning of his second season. He finished with 32 goals in 144 team appearances.

The legend Gianni Rivera played inside and central forward for the Rossoneri, where he scored 164 in a whopping 658 appearances. Nicknamed “The Golden Boy,” he helped the side during one of its most successful phases, garnering three Italian titles, four Coppa Italia, two European Cups, and a UEFA Cup Winners’ Cup.