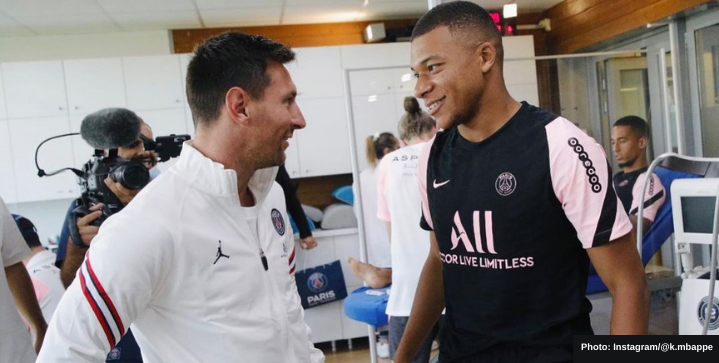 The partnership between Lionel Messi and Kylian Mbappe already appears to be flouring in PSG training.

The first footage of the two stars playing together has PSG fans excited. But it might be short-lived.

After previously balking at the thought of letting Mbappe go to Real Madrid, PSG president Nasser Al-Khelaifi is now open to Mbappe’e exit. The funds would enable PSG to bid for Cristiano Ronaldo as soon as this summer.

Even more, Pochettino put Messi, Neymar, and Mbappe all on the same six-a-side team in training — probably the biggest cheat code of all-time.

PSG has assembled its own version of the world-famous Galacticos made famous by Real Madrid. It’s worth noting that a Real Madrid squad including Ronaldo, Beckham, Zidane, and Luis Figo still failed to win Champions League as a unit.

Pochettino’s central aim (and challenge) is to turn his star-powered PSG squad into European Champions. It’s not quite clear how the Argentine boss plans to line-up his attacking force come game-time.

“The aim is to make a top team from all these top players,” said Poch.

“It’s an immense challenge that we are taking on with enthusiasm. We’re going to have to work out how to all work together to create a dynamic in which each can find his role.

“If we don’t play together and don’t work hard enough, it’ll be difficult to play as we want to. We’ll have to have the constant feeling that we are a demanding and united team.”