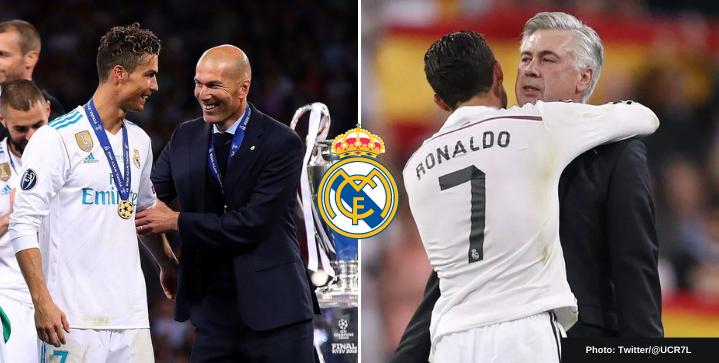 Real Madrid is one the most storied clubs in football history, with 35 La Liga titles and 13 European Cups alone. Expectations run high, so it’s not surprising that the club’s experienced 40 managers — some of which returned for second spells — since its founding in the early 20th century.

Let’s look back at some of the best coaches to guide Los Blancos to glory.

Carlo Ancelotti is the 12th manager in Real Madrid history to coach the club twice. The current manager is also the club’s winningest coach with a 74.8% win rate, followed by Jose Mourinho’s 71.9%.

Don Carlo still holds a special place in the hearts of Real Madrid fans for clinching the coveted “La Decima” in his first stint as Madrid boss. It was the club’s first Champions League title since 2002.

During the 2021-22 season, Ancelotti won the La Liga title and became the first coach in history to earn league titles across Europe’s top leagues: Serie A, Premier League, Bundesliga, and La Liga. The Italian looks to add another Champions League trophy to his resume later this month when Real Madrid take on Liverpool in the 2021-22 Champions League finals.

“The Special One” Jose Mourinho ended his three-year managerial career at Real Madrid with the second-highest win record (71.9%) after Carlo Ancelotti (74.8%).

However, the Champions League trophy and multiple La Liga titles eluded him. Mourinho coached during a Barcelona side that’s often considered one of the best in history. Still, his team won 84% (32 of 38 matches played) during the title-winning 2011/12 season. Mourinho also led Madrid to a Supercopa de Espana and Copa del Rey triumph. The Portuguese boss exited the club following the 2013 Copa del Rey final loss to Atletico Madrid.

Jose Villalonga was the first coach to win the inaugural European Cup, which he did consecutively with Real Madrid in 1956 and 1957. He remains the youngest coach (36 years 6 months 1 day old) to win the tournament to this day.

He’s also the first Spanish manager to win La Liga in his first season coaching at Madrid (1954/55). He left the club with six trophies after three seasons, winning the treble of La Liga, Copa Latina, and the European Cup in his final term.

As a defensive midfielder, Vicente del Bosque made a remarkable 445 appearances for Real Madrid. But it took him three attempts before Fiorentino Perez hired him on as Los Blancos’ permanent coach after two spells as caretaker in 1994 and 1996.

The Spaniard turned out to be the perfect candidate to kick off the club in the 21st century. Under Del Bosque, Real Madrid won two Champions League titles and two La Liga. He drew well-deserved admiration for his player management of Los Galacticos, which included stars like Zinedine Zidane, Luis Figo, and Ronaldo. David Beckham arrived after del Bosque’s sacking at the end of the 2003 season.

Real Madrid went on a four-year drought post del Bosque, while the Spaniard coached Spain’s national team to World Cup triumph in 2010 and Euros in 2012.

ZZ once said that “Real Madrid are the biggest club in the history of football.”

He came, he saw, and Zizou conquered, both as Real Madrid player and coach. The Frenchman took over a side in crisis midway through the 2015-2016 season and won the 2016 Champions League.

The following year in his first entire season as boss, he guided the club to the double of La Liga and Champions League, making him the third Real Manager to accomplish the feat after Carniglia and Jose Villalonga. He also one-upped the Spanish record for most consecutive wins during his inaugural full season with 40 straight victories, beating Barcelona’s Luis Enrique’s 39.

Zizou ended his first coaching stint with three consecutive Champions League titles, tying a record by Bob Paisley and Carlo Ancelotti. He returned for a second spell, during which he won La Liga for the second time in his managerial career. Overall, Zidane won 11 trophies as Real Madrid boss, averaging a piece of silverware every 19 matches.

Often considered the greatest manager in Real Madrid’s 119-year-old history, Miguel Munoz won a remarkable 357 matches as Real Madrid manager. He coached 605 total, winning 14 titles, including 9 La Liga trophies. During the 1959-60 season, he became the first man to win the European Cup as a player and coach.

Munoz won the European Cup three times as a Real Madrid player and two as head coach. France Football ranks him as the 14th greatest football manager of all time.