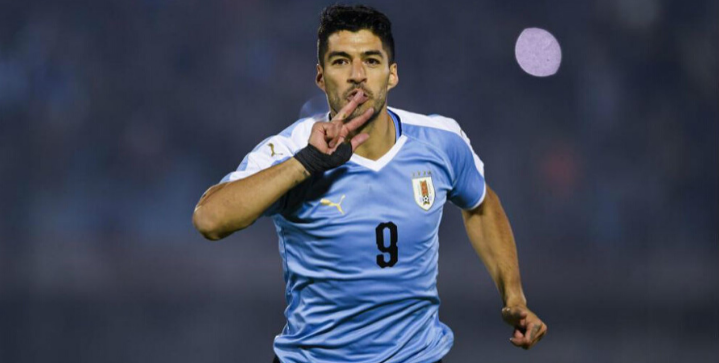 Winners of the first-ever World Cup in 1930, Uruguay is a hub of footballing talent. Here we present some of the team’s most capped players to date.

Maxi Pereira is the most capped player on the Uruguay national soccer team with 125 appearances. He’s appeared in three World Cups, helping the team advance to the quarterfinals in 2010. The following year he played an instrumental role in helping the team win its 15th Coppa América title. He’s played in four total Coppa América tournaments.

Diego Godin is a traditional rugged defender with the ability to bag a goal in key set pieces. Through 125 appearances and eight strikes for La Celeste, he’s helped the team get to the quarterfinals of the 2010 World Cup and captained the side in three games in the 2014 World Cup. He also represented the squad in its 15th Copa America title in 2011.

With 109 caps, Cristian Rodríguez was part of the Uruguay squad that won the 2011 Copa América trophy. The winger also played in the 2018 World Cup.

A tireless worker up front, the center forward Edinson Cavani has scored 46 goals in his 107 games with Uruguay. In addition to playing in three World Cups, Cavani helped La Celeste win its 15th Copa América in 2011.

The hard-working and physical attacker has earned 105 caps with the Uruguay side. His most significant international honors include winning the 2011 Copa América as Player of the tournament. However, FIFA famously banned Suarez from nine international matches after he bit Italian defender Giorgio Chiellini on the shoulder in the 2014 World Cup.

Nearly impenetrable, the Uruguayan goalie Fernando Muslera has made 105 appearances with the national side. He played an essential part of the 2010 World Cup where Uruguay made it all the way to the semi-finals. His most notable highlight includes helping his team win the 2011 Copa América.

Captaining the side for two World Cups, center back Diego Lugano played in 95 games for Uruguay. He also captained the team in the 2007 and 2011 Copa América, the latter which Uruguay won.

Playing over a decade for the national team, Egidio Arévalo Ríos collected 90 caps during his international career. He competed in both the 2010 and 2014 World Cup but is remembered most for helping bring home the 2011 Copa América trophy.

The defensive midfielder Diego Pérez is the tenth most capped player on the Argentina national team. During his tenure, he helped the team to a fourth-place finish at World Cup 2010 and guided La Celeste to the Copa América trophy in 2011.