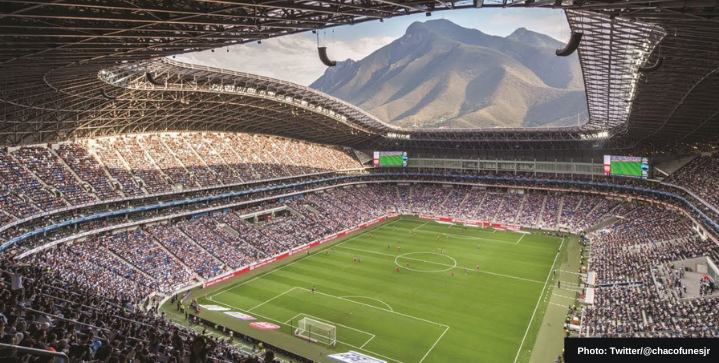 From the world-famous Estadio Azteca to the magnificent Estadio Olímpico Universitario, Mexico hosts some of the football’s biggest and best stadiums. Let’s take a look at our list of favorites.

The official stadium for the Mexican national team, Estadio Azteca holds a whopping 87,000 spectators. The place is a fortress — with Mexico’s arch-rivals the United States only snagging a single victory out of nearly thirty appearances. The venue famously hosted Maradona’s “Hand of God” goal against England at the 1986 World Cup. Club Cruz Azul plays its homes games the arena.

In what is Mexico City’s second largest stadium, the Estadio Olímpico Universitario holds 72,000 seats and is home ground to Pumas. The 1952 arena is an architectural masterpiece with murals by Diego Rivera on the east of the system. The stadium hosted the Summer Olympics in 1968.

With space for 55,000 spectators, Estadio Jalisco is the third largest stadium in Mexico after the Azteca and Estadio Olímpico Universitario. 102-year old club side Guadalajara plays its home games at the venue.

Opening its doors in 2004 with a 46,432 capacity, Estadio Chivas is the main ground for Club Deportivo Guadalajara (Chivas). Shaped like a UFO, the hill-like shape leading up to the stadium features as part of the scenery with grass awnings that surround it.

Monterrey’s 51,000 capacity stadium, Estadio BBVA Bancomer, is the fourth largest stadium in Mexico. Opened in 2015, it is known for its modern facilities and electric atmosphere. Spectators can also view the magnificent Cera de la Silla mountain from inside the stadium.

What stadium is top of your bucket list? pic.twitter.com/OEgSorHP0K

Opened in 1954, Estadio Nemesio Díez is one of the oldest stadiums in Mexico. In addition to hosting two World Cups at 35,000 seats, Deportivo Toluca Fútbol Club calls it its home.

The Mexican football club Cruz Azul made Estadio Azul its home in 1966. With a 35,161 capacity, the iconic stadium was demolished in 2018 after seven decades.

Home to Pachuca Club de Fútbo, the Estadio Hidalgo opened to much fanfare in 1993. In 2004, the stadium added a ubiquitous roof on all sides of the arena and upgraded the seating to 30,000.

With a 30,000 capacity, the Estadio Corona has featured as the home field for Club Santos Laguna since it opened in 2010.  The stadium is known to have the best grass in the country.

Opening in 2007, the 33,333 capacity Estadio Caliente acts as home base for Club Tijuana. Interestingly, the venue is also the only stadium in the league that uses fake grass.

Built for the 1968 Olympics, the 42,000 capacity Estadio Cuauhtémoc also hosted two World Cups. Club Puebla FC is the current homeowner of the field, with the team’s iconic blue colors matching those painted onto the stands.