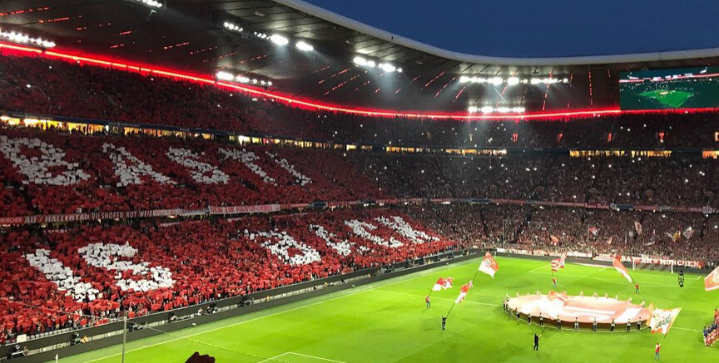 Football reigns supreme in Germany, shown no further than the magnificent stadiums that act like cathedrals.

Here’s a list of some of our favorite stadiums in Germany.

Home to FC Bayern Munich, the Allianz Arena in Munich opened its doors in 2005 to kick-off the 2005-06 Bundesliga season. The arena is the first stadium in the world to feature special plastic panels that light up the building’s exterior. With a 75,000 capacity, the stadium also serves as a playing field for 1860 Munich and German national team.

Signal Iduna Park is one of the most electric atmospheres in the Bundesliga, so loud and fiery that the fans are often referred to as the twelfth man. Opened in 1974, it holds 81,365 seats including a standing terrace.

“I played in Dortmund for years and can say that it is the best stadium in Europe,” said former Dortmund midfielder Ilkay Gundogan. “There is this ultra scene where you always have a curve, where tens of thousands of people jump and scream. The mood in the stadiums is much better in Germany.”

The 62,271 capacity stadium Veltins-Arena in Gelsenkirchen plays home to Bundesliga club FC Schalke 04. Opened in 2001, the stadium features a retractable roof that covers the pitch during rainy days. The arena served as host of the Champions League 2004 final and was of the main venues featured in the 2006 World Cup.

Germany’s third-largest stadium with a capacity of 74,745, Olympiastadion Berlin opened up its doors in 1936 for the Summer Olympics. Home to the Hertha BSC football club, it has also played host to matches in both the 1974 World Cup and the 2006 World Cup.

The former home of Bayern Munich, Olympiastadion München opened its doors in 1972 in preparation for the 1972 Summer Olympics. The stadium is best recognized for its lightweight tent architecture on the exterior and the nearly 70,000 seats it holds on the inside. The arena has been a popular venue for World Cup and Europa League, and Champions League matches.

Home to Bundesliga side Hannover 96, the AWD-Arena broke ground in 1952 using materials left over from World War II to construct the stadium’s foundation. With a 49,200 capacity, the venue is often a go-to for international matches and Bundesliga league championships.

Home to German Bundesliga side VfB Stuttgart, the Mercedes-Benz Arena was originally built in 1933 and called “Adolf-Hitler-Kampfbahn.” The stadium also hosted Germany’s first national team match after World War II. With 41,000 seats, its trademark feature is the distinct fabric roof to protect the stadium against rain.

Breaking ground in 2001, the Volkswagen Arena opened up in 2002 to 30,000 capacity. Some of the distinct features of the stadium include its glass exterior and its see-through roof which allows for natural light. During the winter, the field heats up to all games are played.

Built in 2002, Düsseldorf’s Esprit Arena is one of the classier stadiums in German football. Located near the Rhine river, the 54,600 capacity arena features a retractable roof and a heating system during winter.

Located in Mönchengladbach, Germany, Borussia Mönchengladbach’s 54,057 capacity stadium Borussia-Park made its debut in 2004. Green is the prevailing color that surrounds the arena, especially glowing as it lights up at night.

A 35,000 capacity stadium, Bayer Leverkusen’s BayArena opened up in 1958 but has seen various renovations to bring it up to modern stadiums. With red-decorated seating, it’s a consistent fiery atmosphere that’s one of the best in German football.